Seven years ago, Rob and I found ourselves on two strata committees, we’d just purchased two investment properties in two different strata schemes. Our combined skill sets, Rob a building engineer and me a project manager provided a set of skills that would eventually lead to a successful engineering consulting service and the production of the Strata Portal. We can assist your strata company with the following services:

We have developed a 10-year Forward Maintenance Plan that captures:

This plan can be reviewed and updated by us each year to accompany your strata company documents when they are sent out in advance of the Annual General Meeting or we can show the committee how to do it themselves.

We have developed templates for three reports we regularly produce for the strata industry.

This report is completed within 12 months of the completion of a new building and it lists any works the builder has either done incorrectly or not completed adequately. It is a very important document for newly established strata schemes as it is the vehicle used to hold the builder accountable for unfinished or defective works whilst the builder is still under the construction contract.

The builder also has a liability for six years from handover under Western Australia Government Legislation.

This report is typically requested by Strata Companies during the six year State legislated builder liability period to report on defective workmanship and/or materials since handover. The report also identifies any Strata Company maintenance requirements not the responsibility of the builder.

This report is typically requested by Strata Companies to identify their backlog maintenance requirements. The report may or may not include cost estimates. This report forms a subset of the information provided in a ten-year maintenance plan. Building Condition Reports can be undertaken at any point in a scheme's life-cycle after the six year legislated builder liability period.

Solutions for Strata brings engineering qualifications, knowledge and experience to the role of building manager. We have designed specific tools for the strata industry to streamline the work we do and make it cost effective.

Our service as building manager or more correctly, building engineer, can be custom designed to suit the size of your strata complex and our service could include any or all of the following:

The cost of providing energy to common areas to a residential tower in West Perth was a significant part of the overall administrative cost each year. The buildings consist of four seven-storey and one three-storey residential towers with 94 apartments. The annual energy bill was around $35,000 per year which represented around 10% of the total annual operating cost for the company.

A 30kW solar panel array was designed to sit on the roof of the central tower. It uses 160 high output solar panels and two 15kW central inverters.
Whilst there are other ways to reduce energy bills and consumption, for example replacing light fixtures with lower consumption LED), this was undertaken as a later project. Whilst this is a perfectly valid and necessary approach, light fixtures generally have a short payback period, a relatively short life expectancy and need to be replaced every five years or so. Solar panels have a payback period of around four years and a life expectancy exceeding 25 years and therefore the savings are long term.

Reliance on grid energy has been reduced, energy bills have been stabilized, the carbon footprint reduced and importantly operating costs have gone down.

The system provides on average 70% of the building’s common area needs during daylight hours and around 38% of the daily needs. The payback period on the system was four years with an annual saving, including feedback to the grid, of over $15,000 annually.

Carbon emissions have been reduced by up to 50 tonnes per year.

An inner-city 27-storey residential building was constructed with less than desirable workmanship and quality of materials. Since construction in 2009, this has manifested itself as water leaks through external doors and windows, the façade, plumbing, and through balcony floors and this is mostly due to poor choice of materials, poor execution. Until recently, there had been inadequate attention to the need for proactive maintenance and a lack of focus on wise expenditure in resolving issues.

Through close interaction with the Building Manager, addressing water leaks has become a lot more efficient and effective by identifying the problem, isolating the potential water ingress paths and proposing one or more remedial solutions. The most obvious and cost-effective solution is addressed first and if the problem is not fixed, a process of elimination is then pursued.

In the majority of instances, the water ingress has been resolved, people’s amenity has been improved and maintenance expenditure has been minimised. Of the 210 apartments in the building over 4 years, approximately 70 leaks have been identified, a diagnosis proposed, remedial works undertaken and only a handful require return visits for follow-up action. 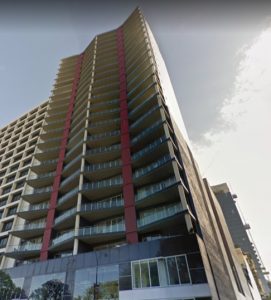 A six-storey, 84-lot apartment building constructed in 2006 had an ad hoc approach to building maintenance and financial management until 2014. It had an annual operating budget of approximately $300,000 and a Reserve Fund balance of $100,000, the latter having been collected at an extraordinary general meeting to undertake questionable works. The company had no Forward Maintenance Plan and the building was crying out for major maintenance and its three lifts were highly unreliable.

The Strata Company engaged Rob as a part-time Building Engineer to develop a 10-year Forward Maintenance Plan and he was made responsible for the development of the annual Administration and Reserve Fund budgets and levy incomes. The Building Engineer’s role is also to acquire competitive quotes for all works and oversees their implementation.

Since 2014, over $400,000 in expenditure has been undertaken which includes internal and external building painting, refurbishment of the pool, replacing all lighting fixtures, installation of pool heating and addressing day-to-day minor maintenance works. The Administration budget has dropped by 5% and has been held static for six years.

The Reserve income has been increased in accordance with the demands of the 10-year plan and this too has remained static for four years, giving Owners confidence about their investment. Despite the $400,000 expenditure, the net financial assets have actually grown to $150,000.

Today, we consult to strata managers and strata committees, we have developed a 10-year forward maintenance plan template that ensures the value of strata company's assets are maintained and where possible increase. We resolve complex building problems by identifying the real source of the problem and fixing it the first time.

Our consulting rate is $175/hr. If you’d like us to advise your strata committee, tell us more about your property below. Alternatively, you can purchase access to The Strata Portal for a low monthly fee. The portal contains everything we know about running a strata company effectively along with handy online templates to make your job easier.